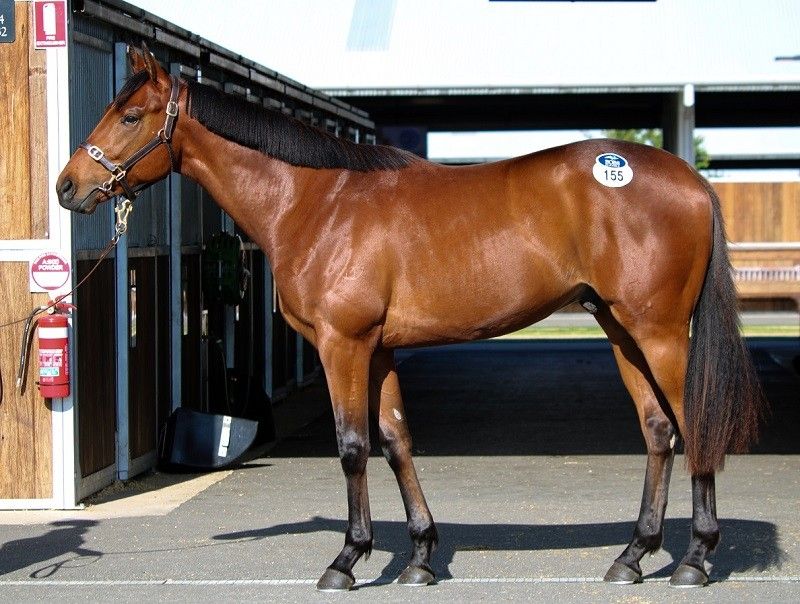 We purchased 20% of this very good value 2YO Epaulette colt from Blueblood Thoroughbreds who purchased the colt from the 2021 Inglis Ready 2 Race sale. He was the bargain of the whole sale, based on our experts thoughts. He is a nice size colt who is a half-brother to just short of $1.0M earner and 8 x winners including the Group 2 Sandown Guineas, MORTON’S FOLK. This colt is also bred on the similar breeding lines as his half-brother, so we know the breeding nick works and works well!  He has a big flowing strand in his walk and stands over ground, just like his stakes winning half-brother.

This colt breezed up in an exceptional time for a horse that was under done in his breeze up preparation and he still stopped the clock at just 10.61 secs. David Mourad commented, “big nice rangy colt, with a really good temperament, always nice and relaxed. This is the trade mark of a lot of our nice horses back in the stables. You’re not going to find one better than this at his price, at this sale”.

EPAULETTE (by Commands) is a dual G1 winner in his own right, one of the best among a golden era of Australian sprinters and a racehorse who added a new dimension to an already outstanding pedigree. Epaulette is building a reputation as a stallion that is truly international and growing stronger by the season, while domestically his reputation as a winner getter is too growing. Epaulette finished within the Top 50 sires by winners, ahead of fellow retiring-to-stud-crop sire DUNDEEL, plus his barn mate LONHRO proving his winner getter title.

On the racetrack EPAULETTE along the way, he chased home BLACK CAVIAR, finishing second to the unbeaten star in her final appearance in the G1 TJ Smith Stakes at Randwick. “He had an electric turn of foot that was emphasised best in the Golden Rose, coming from last two beat a very good group of three-year-olds,” said his trainer Peter Snowden. Epaulette is rated the best son of the leading stallion COMMANDS, a member of the famed EIGHT CARAT family a brother to the champion three-year-old DANEWIN.

He is from the SINGSPIEL mare ACCESSORIES whose four winners from five to race included the G1 winner and sire HELMET and the Group winners BULLBARDS and PEARLS, as well as EPAULETTE.

DILEMMAS is by champion sire and broodmare sire LONHRO, a Broodmare sire of Group 1 winners. His progeny have won over $61 million on the track. His notable stakes winners are GATTING (1st Makybe Diva S Grp 1), OSBORNE BULLS, SO SI BON and GENERAL BEAU.

Dilemmas is closely related to a Group winner, MORTON’S FORK who had 8 wins and over $985,000 in prize money. He won the Sandown Guineas Group 2. Other related stakes winning horses are PIED A TERRE, SHAVANO MISS, GRACEFUL ENCOUNTER and ROMANTIC MISS.

Gerald Ryan was a former top jockey and has vast experience as a trainer preparing feature race winners.

Gerald Ryan has successfully trained many horses that stand at stud including TRAPEZE ARTIST, SNITZEL, RUBICK, ROTHESAY and TIME OF WAR.

NOMINATIONS AND BONUS SCHEMES  – Eligible for the lucrative BOBS Silver bonus scheme and the $1 million Golden Rose and the $2 million Inglis Millennium and Inglis race series.